Read on now to learn:

Who is at Risk?

Some women are more at risk of pelvic floor problems than others with some intense core Pilates exercises including women:

There are two ways that intense core Pilates exercises can contribute to pelvic floor problems:

The Hundred exercise (pictured right) is a core strength and stability exercise involving both legs being raised and held in ‘tabletop’ position or the hips and knees raised together above the body at right angles.

The intensity of The Hundred is increased by raising the head and shoulders of the ground while maintaining tabletop position (including ‘Oblique Lifts’) and by extending one or both legs straight at 45 degrees from the ground (known respectively as the Single or Double Leg Stretch). This exercise and its’ variations with both legs raised have potential to contribute to pelvic floor overload and increased pelvic floor muscle tension.

Scissors is also a core stability and strength exercise. From tabletop position the legs are lowered to the floor alternately without changing the angle of the knee. The Scissors also has potential to contribute to pelvic floor overload and overactive pelvic floor muscles.

Dead bugs are another core stability and core strength using tabletop position. Dead bugs involve lying in tabletop position this time with the arms raised to the ceiling at right angles to the body. From this position the arms are raised above the head to the ground and one leg straightens while the other is held aloft. Dead Bugs activate those muscles having potential for pelvic floor overload and may also promote overactive pelvic floor muscles with insufficient muscle relaxation.

Maintained chest lift is a Pilates exercise – it is a sit-up or abdominal curl exercise that involves the head and shoulders being held lifted off the ground and maintained for a series of breaths. This exercise has the potential to force the pelvic floor down and overload it especially when repeated over time.

This exercise is designed to enhance spinal mobility. Roll ups involve rolling the body back into lying from a seated position on the ground. The legs are extended in front of the body. The body is then raised back up into sitting from the lying down position. The action of rolling down and returning to upright can both increase pelvic floor pressure and pelvic floor tension. Rolling Back involves similar abdominal muscles to the Roll Up but is performed with the knees bent Rolling back involves the strong upper core abdominal muscles contracting strongly when reclining and rolling back and also when returning upright. Both exercises have potential to contribute to overload the pelvic floor and/or inappropriately increase pelvic floor muscle tension. muscle activity.

The Plank Pilates exercise (shown right) is designed as a core and upper limb strength and stability exercise. Plank is performed prone and body weight taken through the forearms or hands and the balls of the feet as the body is raised and held off the ground for a series of breaths. The Plank involves intense sustained contraction of the core muscles.

Push Up is primarily a strength exercise for the core and a strength/stability exercise for the upper limbs. The Push Up involves the body in prone and weight bearing through the hands and the balls of the feet. From this position the body is lowered to and raised from the floor. This exercise involves intense repeated upper abdominal core muscle activation.

Are Pilates Exercises appropriate for all Women?

How to Modify Pilates Floor Exercises

Most of the exercises listed above (aside from the Chest Lift and Rolling exercises) can be modified to reduce the pressure on the pelvic floor. Pilates exercises can be modified by reducing the intensity of upper abdominal muscles involvement, avoiding breath holding and straining with any Pilates exercise. Women also need to be encouraged to relax their pelvic floor and core abdominal muscles having once contracted them. These modifications will be discussed in an upcoming Pilates pelvic floor safe exercises article.

Inside Out Book and DVD Saver Pack ABOUT THE AUTHOR, Michelle Kenway
Michelle Kenway is a Pelvic Floor Physiotherapist and author of Inside Out – the Essential Women’s Guide to Pelvic Support. The Inside Out exercise DVD and book show women how to strengthen the pelvic floor and exercise safely and effectively with pelvic floor safe exercises.

Found this article helpful? Share it with your friends and family!

CHECK OUT OUR INTERVIEW ON SMILE JAMAICA 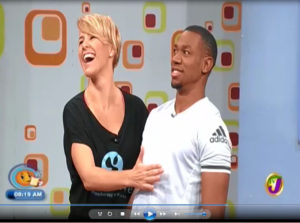